Guests Bro Shbaka- NCOBRA Boardmember, Conversation Reparations is an hour-long digital radio broadcast and podcast focusing on the issue of Reparations. It is hosted by…

This is the official statement that was delivered on February 27, 2020. In attendance were embassy representatives from over fifteen (15) nations.

Universal Periodic Review of the United States (3rd Round)

Statement on Reparations for Slavery

My name is Khalid Raheem. I am a long-term resident of Pittsburgh, Pennsylvania. This afternoon, I will be speaking on behalf of our regions Black, African-American, New Afrikan or Afro-Descendent community regarding the importance and necessity of Reparations as a vehicle and tool toward advancing human rights and racial justice. Like the overwhelming majority of Black people throughout the United States, Blacks in the Pittsburgh region continue to experience disproportionate and systemic poverty, unemployment and underemployment. We also are subject to racial profiling, disproportionate arrest, police violence and mass incarceration. Although we are approximately 13-15% of the local county population, we are usually over 50% of the county jail population. We continue to experience chronic homelessness, oftentimes fueled and exacerbated due to the gentrification of our historic Black-majority neighborhoods. I’m sure you have heard or will hear much more detailed and researched-based reports and accounts than what I offer this afternoon.

My primary concern goes far beyond a descriptive analysis of our problems and dilemma, but most importantly for my people and the region, the urgency of developing and advancing humane and substantive solutions. As a representative of the ‘Peoples Campaign for Reparations and Black Self-Determination’, we contend that the current conditions of Black people in Pittsburgh are rooted in the horrific histories of the Trans-Atlantic Slave Trade and its legacies of U.S. apartheid (Jim Crow), racist violence and phenomena such as mass incarceration. We contend that for the United States to improve its compliance with international human rights laws and expectations, it must both acknowledge and then take concrete steps to remedy the conditions of its Black, African-American, New Afrikan or Afro-Descendent citizens and residents. In the Pittsburgh region and elsewhere, the acknowledgement must include a public apology by government officials as well as those entities (banks, insurance companies, manufacturing companies, labor unions, businesses, colleges, universities, etc.) that directly participated in and/or benefited from the slave trade, Jim Crow and the systemic and institutional oppression and exploitation of Black people.

Achieving this human rights objective will require assistance and support from the international community in both creating a global context that demands reparations and in helping us to untangle the layered web of countries, merchants, banks, insurers and businesses involved. We also wish to call upon the international community to support our local efforts to construct and convene  a commission for the purpose of  soliciting information on what form reparations should take (for example: land, cash, educational vouchers) and the process for its distribution. Current and historical precedents and examples already exist. And, certainly last but not least, we raise the issue of Black Self-Determination as a right to be exercised by Blacks in the Pittsburgh region and throughout the United States. How are we to move forward? Does the current political and economic structure serve our immediate and future needs? What is the best or better system to facilitate the process for remedying past and recent harm?  And, what are the type of systems that are needed in order to protect the best collective interest of Blacks within the region as we advance human rights globally? We certainly would need support from the international community in pursuing these endeavors. So, in conclusion: on behalf of my colleague Doug Connor, the Peoples Campaign for Reparations and Black Self-Determination and the people of the Pittsburgh region, particularly the Black or Afro-Descended communities, I would like to thank you for your time, patience and support. 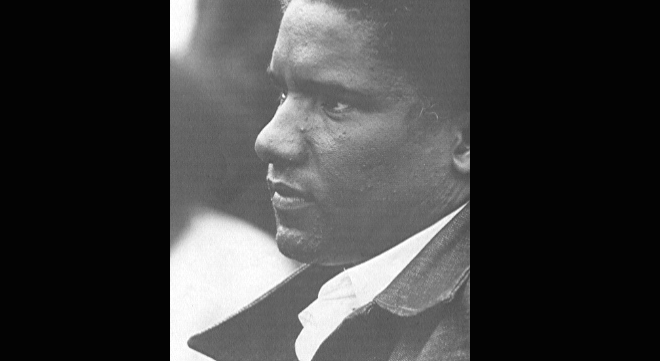 The late James Forman, a former leader of the Student Nonviolent Coordinating Committee, introduced his “Black Manifesto” document in April 1969 at a conference in Detroit. The manifesto demanded $500 million in reparations from white church organizations to make up for the crimes and injustices suffered by Black Americans. Sign Up For Our Newsletter! Close…

Komissions, Kampaigns, Kommittees of NCOBRA. What we do! What you can do! Today’s focus: The ASHE Kommittee! Conversation Reparations is an hour-long digital radio broadcast and podcast…

Tonight we will review Dr. King’s advocacy not just around the broader issue of poverty but his specific support for reparations for the descendants of the victims of slavery in the United States. 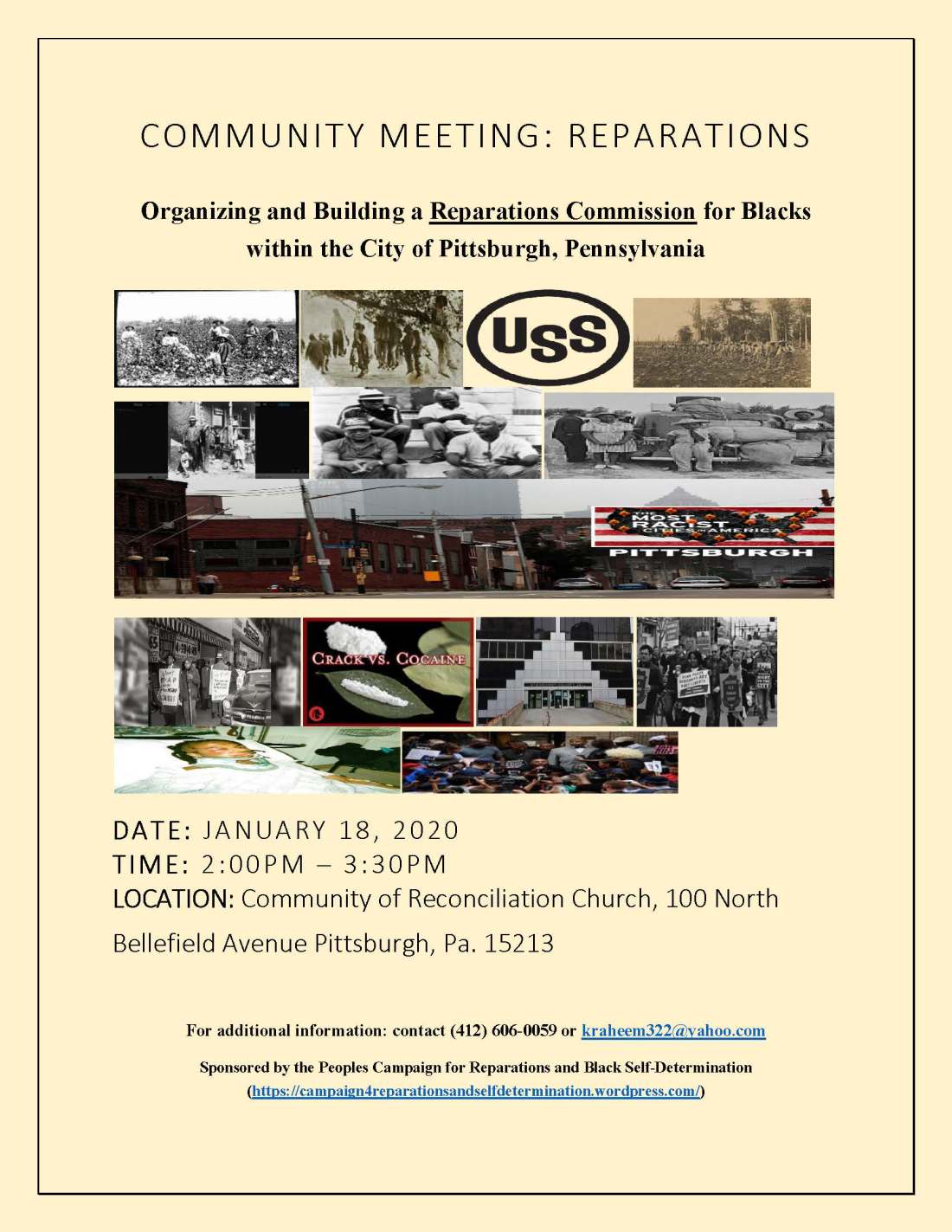 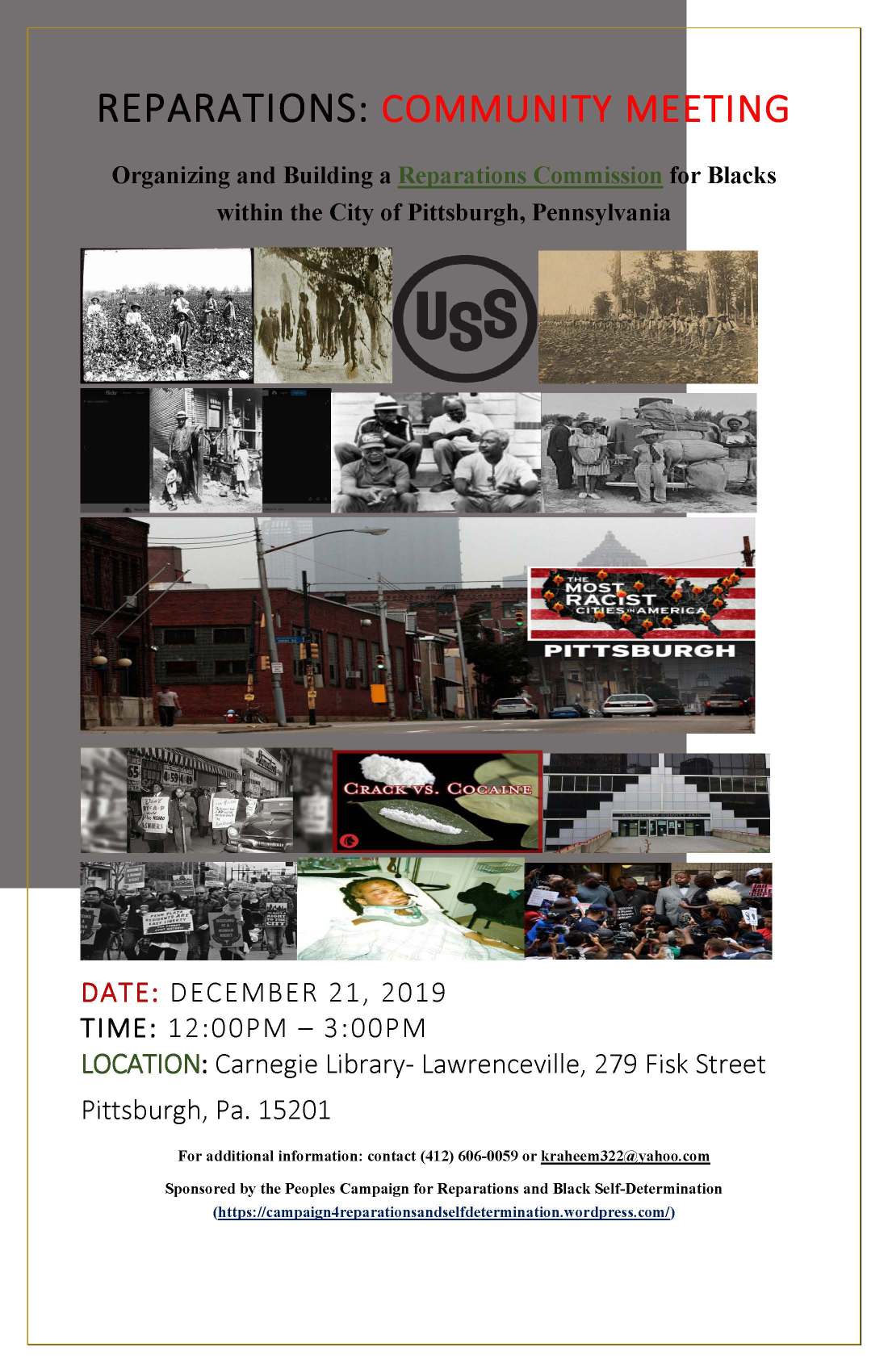 Prime Minister Gaston Browne recently wrote a letter to the institution’s president seeking reparations because its famed law school was founded with the wealth of a sugar plantation owner who enslaved Antiguans. Continue reading →

The Princeton Theological Seminary is pledging to spend nearly $28 million on reparations over its ties to slavery, an effort believed to be one of the largest of its kind. Under the plan, which was announced last week and will be implemented over the course of the next five years, the private school of theology in New Jersey will offer 30 new scholarships and five doctoral fellowships for descendants of people who were enslaved or for others from underrepresented groups. […]

via A New Jersey religious college will set aside nearly $28 million for slavery reparations — FOX2now.com

< Previous Next >
+ Add your own event Eventbrite